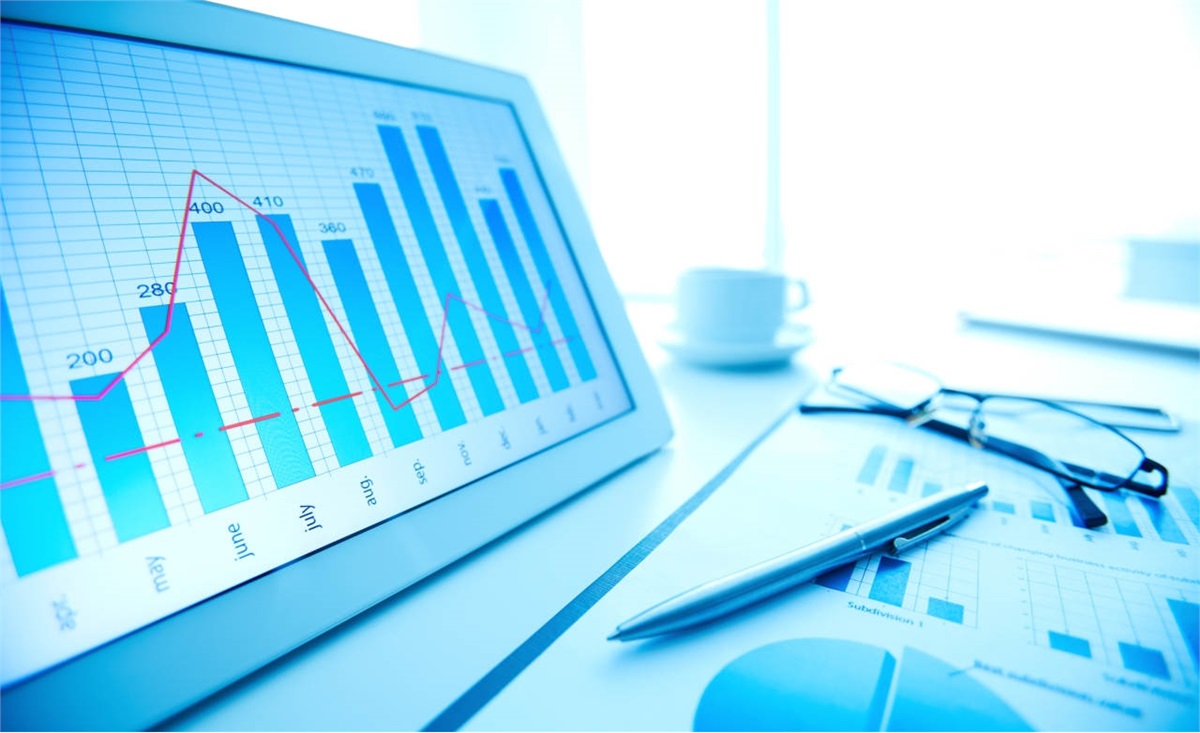 Within our mandate, the Fed is ready to do whatever it takes to support the economy. Believe me, it will be enough.

No, he didn’t, but the Fed’s actions seem to have said it for him.  Given the speed and force with which the Fed has moved, he might as well have uttered those words.

In actuality, it was European Central Bank President Mario Draghi who voiced this promise. In 2012, as Spain and Italy careened towards a financial cliff Draghi gave a speech (Bloomberg News) in which he said:  “Within our mandate, the ECB is ready to do whatever it takes to preserve the euro.” After a pause, he added firmly, “Believe me, it will be enough.”

In some respects, “whatever it takes” became Draghi’s legacy. No one remembers what he said during the rest of this speech. Just the thought of unlimited central bank firepower encouraged investors to step into Spanish and Italian government debt. Long story short: Another financial crisis was averted.

Perhaps the Fed’s rapid response has created the same confidence for American investors. Because despite the tanking economy, markets are fairly robust. Let’s take a deeper look.

The economy is in a free-fall.

Over a six-week period, there have been 30 million first-time claims for unemployment insurance (through April 25) (https://fred.stlouisfed.org/series/ICSA ). It’s by far the worst number of layoffs we’ve ever seen, and it is disheartening to see.

Nonfarm payrolls for April will be released May 8. It will easily exceed the prior record of two million lost jobs (https://fred.stlouisfed.org/series/PAYEMS#0 ) at the end of World War II.

Sadly, we may see an acceleration in the economic contraction this month when April’s data roll in.

“Many standard economic statistics have yet to catch up with the reality we are experiencing,” Powell said at his end-of-April press conference. “Manufacturing output fell sharply in March and is likely to drop more rapidly (in April) as many factories have temporarily closed.”

Put simply, a health crisis has morphed into an economic crisis, with the economy contracting at depression-like speed.

“The severity of the downturn will depend on the policy actions taken at all levels of government to cushion the blow and support recovery when the crisis passes,” Powell said.

The markets:  Best monthly gains since 1987

During April, the Dow Jones Industrial Average and the S&P 500 recorded their best monthly gains since 1987 (https://www.marketwatch.com/story/after-a-blockbuster-april-for-the-dow-and-sp-500-is-sell-in-may-in-the-coronavirus-era-a-smart-strategy-2020-04-30 ). It’s an incredible disconnect between the financial economy and the real economy.

One of the recurrent themes we emphasize is that bull markets occur during economic expansions and bear markets coincide with recessions. Expansions outlast recessions, and expansions drive the economy to higher levels. And stocks follow, albeit unevenly.

The one glaring exception over the last 50 years was the 1987 market crash, which didn’t lead to an economic contraction.

The four-week 34% decline in the S&P 500 (https://fred.stlouisfed.org/series/SP500) qualifies as a bear market. Stocks imploded at a stunning pace as investors sensed the economy was running into a COVID-19 wall.

But the rally over the last month has been nothing short of astonishing given today’s dire economic environment. Year-to-date, losses in U.S. stocks have been quite modest, as the table below illustrates. 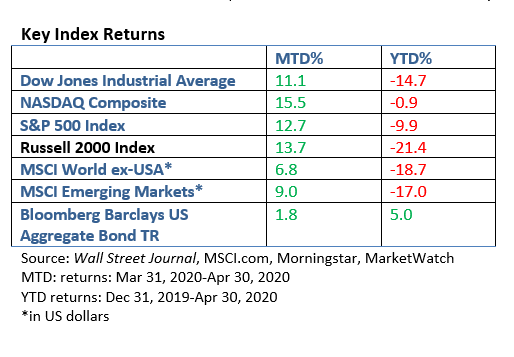 The Fed’s unlimited firepower has not been enough to prevent a debilitating economic decline, but its unprecedented steps have kept an economic crisis from morphing into another financial crisis, with a massive amount of liquidity and a promise of more support aiding stocks.

Further, government stimulus of over $2.5 trillion is helping sentiment. Talk of a vaccine or treatment that would end the pandemic has been a factor. And, we believe, investors are looking to 2021, when there is the anticipation that corporate profits will turnaround.

Of course, the outlook is very uncertain. Have investors been too optimistic?

Additional government spending and support may be needed to jumpstart economic activity, as Powell alluded to in his press conference. Deficit hawks may cringe at talk of new spending and new programs haven’t been problem-free. So far, fiscal stimulus has received strong bipartisan support.

Meanwhile, the reopening of large swaths of the economy may or may not go as planned.

Another wildcard will be consumer behavior. Prior patterns are unlikely to return to pre-crisis behavior, at least right away, and social distancing at restaurants, airlines, and industries that require person-to-person interactions could limit activity and sales.

Yet market action suggests some type of economic bottom is in sight. Think of it like this: The level and the direction of stocks is the equivalent of the collective wisdom of millions of small and large investors.

They are not simply opinions, but real people and institutions that buy and sell equities, effectively putting their money where their mouth is, as they say.

No one has a crystal ball. No one can tell you where stocks might be at the end of the year. There are too many unknown variables. Those who make forecasts are simply offering opinions.

We understand the uncertainty facing all of us. We are grappling with an economic and a health care crisis. It’s something none of us have ever faced.

We have addressed various issues with you, but we have an open-door policy. If you have questions or concerns, let’s have a conversation. That’s what we're here for.

Laid off and near retirement–what now?

Many who have unexpectedly lost a job become paralyzed by fear and don’t know where to turn. It’s a blow to one’s self-esteem, and we understand that unexpected obstacles have been put in your path.

Job losses have skyrocketed. Some are laid off and others are furloughed, hoping to return to their jobs when the lockdown ends.

The number of first-time claims for unemployment insurance would have been inconceivable just a few weeks ago. Think about it. The jobless rate was at a 50-year low of 3.5% in February and the outlook was bright.

What should you do if you are laid off? You will need a plan.

The ideas I’m providing give a broad-based outline. Your situation is unique, and we are here to assist as you hammer out a strategy. Perhaps your job is secure or you have retired, but please feel free to share our ideas with any friends or family members who have lost their job.

1. Assess your financial situation. What are your liquid assets outside retirement accounts? How long can these sustain your lifestyle? What are any outside sources of income       you may have, whether yours or your spouse’s? Will you receive a severance and paid health insurance? All will play into your plan.

2. File for unemployment. Your company has paid into your state unemployment program and the federal government is supplementing with an additional $600 per week (https://www.investopedia.com/federal-pandemic-unemployment-compensation-fpuc-definition-4802039) through July 31 via Federal Pandemic Unemployment Compensation (FPUC) (https://govstatus.egov.com/ui-benefits/CARES ). You are out of work through no fault of your own. File! Receiving unemployment will provide you with additional income and cushion cash reserves.

3. Come up with a realistic budget. Add your savings, unemployment, and any additional income, which will provide you with your total cash available over the next six months. Then, divide your monthly expenses into total cash. You may realize that you have greater resources than you had expected.

4. Be sure to include health insurance in your calculations. Can you apply for Medicare?

Please recognize that you are not in this alone. We are here to assist you as you formulate a plan.

Might you consider going back to work? Could you consult? Would you take a lower-paying, less stressful job? Is it time to tap your retirement accounts?

An unexpected layoff is debilitating. It affects one’s self-worth and can lead to paralysis. Don’t let that happen to you.

These questions and others will help you formulate a financial plan as you navigate an uncertain future.

The steps above are a broad overview. Putting together a plan is critical. It’s half the battle. You may find you are in a much better position than you realized, which will relieve an enormous amount of stress. Either way be proactive, not reactive.

We hope you’ve found this review to be helpful and educational.